CAFFEINALL is a powdered caffeine that you can shake on food or into beverages to give them a hit of caffeine.

I was sent a free sample from the manufacturer to try out.

By itself Caffeinall has a slightly sweet yet bitter taste, however, it isn't meant to be used by itself, but instead, added to beverages and food.

I added it to my coffee and couldn't taste it and I also tried it in my oatmeal. It was completely undetectable this way as well.

Caffeinall will energize you according to the amount you dispense. I found it a bit hard to measure accurately. The amount that I did consume gave me a nice lift.

This product should be used with caution and be kept out of the reach of children. Since it comes in a salt/sugar shaker-like package, it could be mistaken by those who wouldn't know better. With 18 grams of caffeine, that mistake could be dangerous.

Caffeinall is a good product for those that want to boost the caffeine level of drinks or to add caffeine to food. I was a bit annoyed by it not dissolving in my coffee, so perhaps it's best used in food instead. 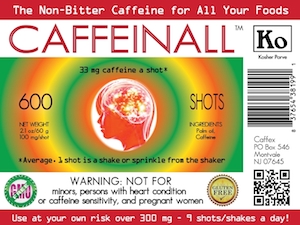