The dangers of energy drinks are getting a lot of press because of the sheer volume of energy stimulating products in the marketplace and the ease of access to these by minors.

While most energy drinks don’t have as much caffeine as a Starbucks’ coffee, they are heavily sweetened and easy to drink, which appeals more to the younger demographic.

Therefore, we are seeing increased incidents of those 18 and younger having dangerous side effects from consuming too many energy drinks at one time.

Fourteen Dangers of Drinking Too Many Energy Drinks at One Time

Despite these serious dangers quitting caffeine is often easier said than done.

Due to the addictive nature of caffeine exacerbated by anxiety and lack of sleep, actually quitting caffeine can be a nightmare. After all, you’ve reached a place where you practically need caffeine to function. In this situation, it’s time to consider a legitimate caffeine withdrawal detox to cut caffeine quickly, without the pains of cold turkey detox. 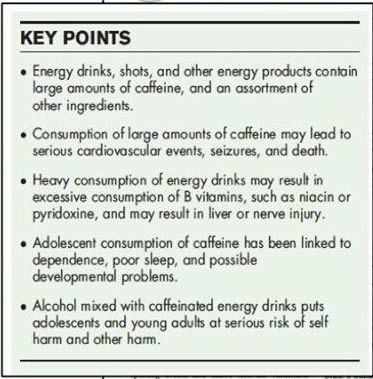 From: Current Opinions in Pediatrics (Apr 2012)

The World Health Organization (WHO) just released a warning letter concerning the dangers energy drinks pose to young people, especially since they found 68% of adolescents consume them.

To reduce energy drink dangers, the recommend the following to government agencies:

Their report is found here.

Too much of anything can potentially be dangerous, so moderation is recommended when consuming energy drinks as well. Caffeine (trimethylxanthine) and other ingredients in these beverages are drugs and should be respected.

To reduce the potential energy drink dangers education is key. Consumers need to be aware of how much caffeine is in a drink or product and parents need to know exactly what their children are drinking and talk to them about what is safe.

Supermarkets in the UK have banned sales of Energy Drinks to those under 16. Any drink with more than 150mg per liter of caffeine must require proof of age before purchase (bbc).
By Caffeine Informer Staff