Caffeine: Facts, Usage, and Side Effects

Caffeine is the most widely used psychoactive substance on the planet. Here’s an in-depth look at this drug and how it interacts with the human body.

Caffeine is a naturally occurring compound found in plant species predominantly growing in the Tropic or Sub-Tropic regions of the world. Plants use caffeine as a natural pesticide since it is toxic to insects and other pests.

However, caffeine in small quantities has therapeutic benefits in some mammals. Early human civilizations discovered that consuming plants containing caffeine offered stimulating effects and these plants even were considered sacred in some cases.

Human exploration and trade of tea and coffee soon caused caffeine use to be spread throughout the world and today greater than 80% of the world’s population uses caffeine in some form or another.

Although it is often stated that 60 to 100 plant species contain caffeine in nature it is a bit difficult to find specific plants mentioned or researched other than what’s in the table above.

Botanists are likely counting many more of the subspecies and variations of the plants listed above.

Caffeine is an alkaloid, which means that it contains mostly nitrogen atoms. Morphine and nicotine are also common alkaloids. 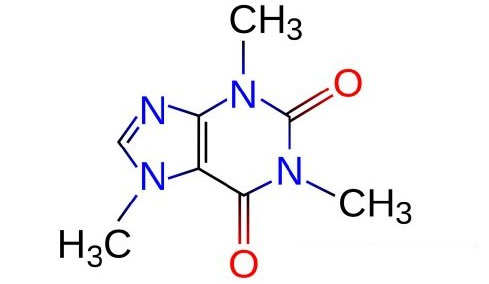 Pure caffeine is also known as trimethylxanthine and is highly water soluble. It has a melting point of 238 °C (460 °F) and caffeine has no odor but tastes very bitter.4

Caffeine’s Interaction with The Human Body

Caffeine is metabolized by the liver and broken down into theophylline, theobromine, and paraxanthine. A 200 mg dose of caffeine would take about 40 hours to be completely metabolized based on the average caffeine half-life of 5-6 hours.

However, the greatest perceived effects from the caffeine are experienced during the first 4-6 hours after consumption.

The Positive Effects of Caffeine

While being metabolized by the body caffeine has several well-documented positive effects on the body and its processes. Here are some of the major effects.

While caffeine can offer a person benefits, it also comes with its share of negative effects, which vary by dose and by a person’s tolerance and sensitivity level.

People who are experiencing the negative side-effects of caffeine are advised to quit or cut back on their consumption.

Caffeine in Food and Beverages

Originally caffeine was only ingested through the consumption of plant parts that naturally contain caffeine, but food scientists began synthesizing caffeine as an additive for all kinds of beverages and foods.

According to our databases, there are over 800 products that contain some level of caffeine and there are many more yet to be added from all around the world.

Most food governing agencies like the FDA do not require that foods containing natural ingredients like coffee or tea label that the product contains caffeine, but any added caffeine does have to be identified on the product’s label.

However, most food governing agencies do not require the amount of caffeine to be disclosed on the product’s label. Many companies have begun voluntarily disclosing how much caffeine their products contain on labels and we expect this trend to continue.

See our extensive database for the caffeine content of beverages here and the amount in foods here.

How Much is Safe?

Because caffeine is a stimulant, it should be respected and kept within safe levels for daily consumption. While the safe amount of caffeine can vary based on a person’s tolerance, sensitivity, weight, age and health history there are some established guidelines recognized by health authorities.14

For a more in-depth look at daily caffeine safety amounts as well as visual representations of each amount see this article.

The Addictive Nature of Caffeine

One of the most prominent issues surrounding the use of caffeine is its addictive nature.

While caffeine still hasn’t been included in The National Institute of Drug Abuse’s Commonly Abused Drugs List it certainly does cause some level of addiction.

Recently both caffeine overdose and caffeine withdrawal were both added to the latest edition of the Diagnostic and Statistical Manual of Mental Disorders (DSM-5), but caffeine addiction has not been added as a diagnosable condition.

However, those that use caffeine and have tried to quit can attest that caffeine causes some degree of both psychological and physiological addiction.

Caffeine addiction can range from mild to severe and most of the time it is an addiction most people can live a healthy life with. This is not the case when dangerous amounts of caffeine are being consumed daily or if caffeine is consumed through sugary beverages, which are linked to obesity and type 2 diabetes.15

Use our Caffeine Addiction Diagnosis Tool to assess your level of addiction to caffeine.

Cutting back on caffeine would be recommended for anyone who begins to consume amounts exceeding what is recommended as safe or if getting enough caffeine interferes with work or daily functioning.

Since caffeine is a toxic substance it can cause severe overdose reactions and even death if too much is consumed at one time or over a short period of time. On average the LD50 or lethal dose of caffeine for humans is 150 mg per kilogram of a person’s body weight per day.16 Our Death By Caffeine App is based on this formula.

However, the lethal amount can be much less depending on a person’s unique genetic make-up and health history. There have been several well-documented deaths associated with caffeine and in most of the cases less than the LD50 was consumed.

Deaths related to caffeine consumption, especially among teens have caused several consumer groups (as well as politicians) to call for the ban of dangerous caffeinated products. These groups are pressing for tighter restrictions on how kids can access caffeine.

Despite the problems associated with caffeine use, don’t expect humans to quit using it anytime soon. According to the International Coffee Organization coffee alone is a 60 billion dollar industry worldwide and the energy drink/energy shot industry is worth over 13 billion in the USA alone.

There is huge money in keeping people caffeinated and consumer demand has never been greater since China is now turning on to espresso based coffee.

All of this money means that the industry has a huge influence on lawmakers and food policy, so any new regulations involving caffeinated products will likely be small. However, expect stricter caffeine labeling regulations to be issued soon most likely including caffeine amounts and safety warnings.17

Educating consumers about caffeine is the single most important factor in helping people safely use caffeine. If consumers gain knowledge about the amount of caffeine in the products they consume as well as the dangers associated with consuming too much, then consumers will be able to make educated and responsible decisions regarding caffeine consumption for themselves and any minors under their care.

Schools also should build caffeine safety education into their health curriculum, so that caffeine awareness and safety can be ingrained into our culture from an early age.

Caffeine use isn’t going stop anytime soon, so understanding how to use caffeine both safely and responsibly is crucial.