Allergic to caffeine? It seems like you aren’t alone as hundreds of people have now testified to strange reactions experienced after caffeine consumption.

This article has been compiled from anecdotal evidence. Some people do not metabolize caffeine as well as others. Others are also sensitive to adrenalin. It pays to know your limits with caffeine. If you suspect that caffeine is causing problems, this can be tested by eliminating it from the diet.

Some time ago, we published a short post about the possibility of allergic reactions to caffeine.

That post received hundreds of comments from those who claimed to have experienced some type of adverse reaction to caffeine.

We have painstakingly sifted through all those comments, compiling the top 20 caffeine allergic reactions in order from most common to least common.

In most cases these symptoms were reported after only having a little to moderate amount of caffeine through coffee, tea, soda and/or energy drinks.

Most Common Allergic Reactions to Caffeine

Is this Scientific Evidence?

At least one scientific study has shown that people can have anaphylactic reactions to caffeine and is confirmed by a skin prick test.1

There is evidence regarding the inability to process caffeine as some people lack the genes responsible for this or the genes aren’t being expressed as they should be. This allows caffeine to build up in a person’s body rather than being broken down properly. These people are described as hypersensitive to caffeine.2

The above data is entirely based on anecdotal evidence, so don’t take it as gospel or scientific, but rather consider these caffeine allergy symptoms as possible since they were reported by a large number of people. If a person suspects a caffeine allergy, he/she should cease caffeine consumption immediately and then assess as to whether it was indeed the caffeine. The symptoms should subside after caffeine is eliminated.

Did you know that rutaecarpine can remove caffeine from your system faster? Find out how here. 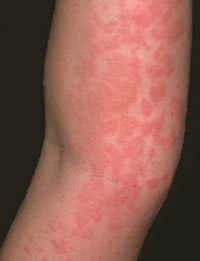 Most people on the original article reported several of the above symptoms and some of the caffeine allergy symptoms were quite bizarre. The symptoms that were the strangest included itchy ears & anus suffered by one poor soul and a sweaty butt crack reported by another…

Caffeine allergy has also been linked to a form of ADD and dementia in adults. The claim is that caffeine induced anaphylaxis impairs people’s abilities to concentrate and remember things. (Src.)

Could It Be Mycotoxins?

Mycotoxins are essentially chemicals produced by fungi and they can produce all kinds of negative reactions when ingested by humans. A recent study 3 from the University of Valencia in Spain found that commercially sold coffee is often contaminated with mycotoxins. They’ve identified 18 different mycotoxins that are commonly found in coffee and found that the levels in decaffeinated coffee are often higher than that of regular coffee.

If you have a reaction to coffee but not other caffeinated products, there’s a good chance that you are sensitive to mycotoxins and not the caffeine.

What To Do If You Are Suffering

Please note: A surprising number of products contain caffeine, and some have a lot more than what you think.

Even decaffeinated drinks still contain caffeine – although only a small amount such as decaf brewed coffee.

Education is best way to prevent an allergic reaction to caffeine.