Dunkin’ Donuts started as a donut bakery shop back in 1950 in Quincy, Massachusetts and since has become a worldwide franchise comprising almost 10,000 stores worldwide and almost 7,000 USA locations.

*Prior to 2016 Dunkin’ Donuts’ customer service stated that their ice green tea has 40mg/6 floz of the green tea mixture which is not including the ice and water added, therefore this is an estimated amount.

A recent test conducted by BuzzFeed found Dunkin’ Donuts Brewed Coffee to average about 15.6 mg/ounce or 218 mg per 14 fluid ounces. This is just about 8 mg more than what Dunkin reports.

In 2017, Dunkin Donuts finally began listing the caffeine content of most of their beverages on their official website. There are some products that aren’t yet listing caffeine amounts such as their teas and hot chocolates, but perhaps these will be listed soon. What we have above concerning those products is what we were told by customer service the last time we reached out.

Not only did Dunkin’ Donuts increase the caffeine of their standard brewed coffee to be more inline with coffee establishments such as Starbucks, but they also reformulated their decaf.

In 2015, a medium Dunkin’ Decaf had 74 milligrams of caffeine, which is very high for a decaf coffee with about as much caffeine as an espresso shot.

This was not received well by the consumer and I imagine this was part of the reason they went back to more standard caffeine amounts in 2016. People choose decaf for a reason and 74mg is too much for those with a sensitivity to caffeine.

In addition to the above-listed beverages, Dunkin’ Donuts has several flavored versions of their brewed coffee and espresso-based coffee drinks. Some are available seasonally and others all year long.

The caffeine content of the flavored varieties would be the same as above, but would only depend on whether it is a brewed coffee beverage or an espresso-based flavored beverage.

Click here to find out how many cups of Dunkin’ it would take for you to overdose!

How Does Dunkin’ Compare? 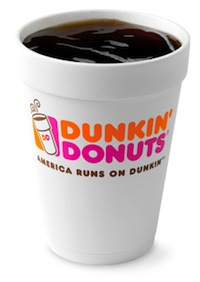 The caffeine content in Dunkin’ Donuts coffee used to be less than other restaurants such as Starbucks or Caribou coffee, but this has changed. Dunkin in the past used less ground coffee to make their brewed coffee.

One difference is that their espresso based drinks don’t follow the standard shot amounts like the others typically do. For instance, a true double shot should have double the caffeine as a single shot and a triple shot, triple the caffeine. Dunkin’ doesn’t use double the amount of espresso ground coffee to make their ‘double’ shot, which results in less caffeine than a standard double shot.

Over the last 15 years, Dunkin’ Donuts has strengthened their coffee brand significantly by introducing espresso-based drinks as well as cold coffee beverages such as their popular Coolatta. Their coffee tends to be more affordable than other coffee houses and they have become just as popular for their coffee as they are for their 52 varieties of donuts.

Are you a fan of Dunkin’ Donuts coffee? Why do you prefer Dunkin’ over others?