Fatalities from caffeine intake are rare. Deaths by energy drinks are rarer due to the large amount of liquid that would need to be ingested at one time. 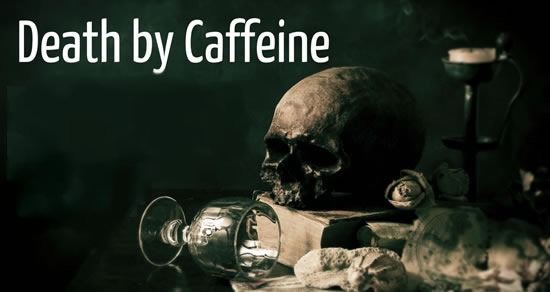 However people with underlying medical conditions could be more susceptible to caffeine overdose with smaller amounts than our caffeine calculator would illustrate. See also the coffee overdose calculator to check your safe levels.

Tragically, people have died from too much caffeine, and here are some of the cases where caffeine was believed to cause of death.

Caffeine pills are dangerous as they deliver a huge dose of caffeine that can be taken multiple times in a short period of time.

1. The death of a 19-year-old Connecticut resident, James Stone, has been blamed on “caffeine toxicity”. The culprit was a dose of two dozen No-Doz tablets.

From the New Haven Register:

“I don’t want any other parent to go through what my wife and I have been through,” James Stone Sr. said. “It does not say on the bottle that it will kill you. It says right on the box that it’s like a cup of coffee.”

A quick tally of the dose equates to about 4800 mg of caffeine (presumably these were the maximum strength No-Doz). As you can see on the box: “Safe as coffee”.

Caffeine in the form of this little pill hits you all at once. Drinking the equivalent amount in coffee takes considerably longer.

This is a tragic story – and serves as a warning. Don’t mess around with caffeine pills – especially if you have high blood pressure issues or heart problems.

2. 26-year-old, Gemma Ann Jones from the UK, was found dead after she consumed 50-100 caffeine-laden pills called EPH25. It appears that this caffeine death was a suicide.

These pills also contain ephedrine and other dangerous supplements as well as 200mg of caffeine. Link

3. Another woman from the UK, Katie Goard, also recently overdosed by taking diet pills. In this case, the pill was called Fat Metaboliser and we are unsure how much caffeine is in each pill, but the coroner established that Katie consumed an equivalent to more than 50 cups of coffee.

Her family also reported that she was also drinking alcohol all evening long prior to her death. Src.

4. 24-year-old Cara Reynolds from the UK recently overdosed on raspberry ketone pills that also contained 160 mg of caffeine each. This was an intentional overdose due to her mental state after breaking up with her boyfriend.

The coroner estimated her blood caffeine level to be equivalent to that of drinking 225 cans of Red Bull. Link.

The BBC News recently reported that a university in England mistakingly administered 30 grams of caffeine powder to two students participating in a study about the effects of caffeine on exercise. The students were supposed to have received .3 grams or 300 mg. Although typically 30 grams would be a lethal dose for most people, due to prompt medical attention, these students didn’t die. Both students have made a full recovery.

Bulk caffeine powder is popular with bodybuilders and is gaining popularity among teens.

1. A fatal case in Australia was researched in 2009. Between 8 am and 3 pm the 28-year-old patient drank 7-8 cans of an unnamed energy drink. He collapsed at 3 pm and suffered a fatal cardiac arrest. Researchers “…postulate a possible role of excessive consumption of caffeinated energy drinks in triggering the life-threatening cardiac events”.

2. A Nigerian man died after drinking 8 cans of Bullet Energy Drink. He did this as part of a bet to win less than 100usd. After he finished the last can, he became unconscious and was pronounced dead a short time later. It is unclear how much caffeine is in Bullet, but it seems comparable to that of a Red Bull. Source.

3. A Japanese man died from drinking too many energy drinks along with possible intake of caffeine pills.

Shinichi Kubo, a professor of forensic medicine at the university, concluded that the man had died from a caffeine overdose and reported the results to the police after carrying out an examination. While no other illness or abnormality was recognized, a small amount of alcohol was found in the man’s blood and a high concentration of caffeine was contained in his gastric residuals, blood, and urine. Source.

4. In 2017, a 16-year-old South Carolina high school student died from consuming too much caffeine according to the Richland County Coroner. (src.) There was no pre-existing heart condition discovered during the autopsy. It is believed that Davis Allen Cripe consumed a large McDonald’s latte, a large Mountain Dew, and an unknown energy drink within the two hours proceeding his collapse in the classroom. This comes right on the heels of a recent study that found energy drinks to have a greater impact on blood pressure and heart rate than beverages that contain just caffeine alone. Even though Davis didn’t consume a lethal amount of caffeine, something with the combination of what he consumed caused him to have a severe arrhythmia, which led to his death.

5. The FDA is investigating 13 deaths that have been attributed to 5 Hour Energy Shot over the last four years.

1. A tragic fatality occurred in the US in 2011 after a 14-year-old girl consumed two 24 ounce cans of Monster (480mg caffeine) before going into cardiac arrest.

2. In 2013, a mother filed a lawsuit against Monster for the death of her 19-year-old son. He consumed 3 Monsters in the 24 hours prior to his death and about 2 to 3 a day for the last 3 years. Three 16 oz. Monsters would contain 480 milligrams of caffeine.

3. In 2015 a 19-year-old man reportedly drank 3 1/2 twenty-four fluid ounce Monsters and then played basketball. He collapsed while playing and died at the hospital. His father is now suing Monster (January 2017) for unspecified damages. This young man would have consumed 840 mg of caffeine in short period of time. The cause of death was cardiac arrhythmia which was triggered by the excessive caffeine and vigorous exercise. Source.

The American Association of Poison Control Centers tracks all the calls they receive from intentional or accidental overdose of all kinds of substances and drugs including caffeine and energy drinks.

*The ages of some of the individuals were unknown.

The above data tells us that there are indeed people ingesting too much caffeine from products like energy drinks, coffee, and caffeine pills.

The majority of these incidents are happening to those under the age of 20, which is somewhat alarming.

Luckily for the majority of those involved, there were no reported deaths as the result of caffeine consumption in 2013 as reported by the AAPCC, but 1,182 people were treated at a medical facility as the result of the exposure with 12 people experiencing major negative health symptoms.

While death by caffeine does occur, it is extremely rare.