FireStar Intelligent Energy is a packet of caffeinated flavor crystals that deliver 180 mg of caffeine.

FireStar uses extended release technology to gradually release the caffeine over time instead of all at once like other products.

This product is marketed as an alternative to energy drinks.

FireStar is available in 3 flavors; Cherry, Cola, and Icy Mint and comes in two different strengths.

The company recently sent us some samples for review. 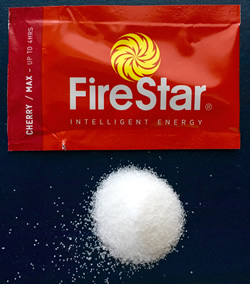 A sachet of FireStar is just a little larger than a sugar packet and contains white crystals that resemble sugar.

I sampled both the Cola (regular strength) and the Cherry (max strength) varieties.

The Cola had a nice cola flavor and reminded me of candy. I couldn't even detect the taste of the caffeine, which was surprising.

The Cherry flavor on the other hand was a blend of cherry and menthol with the bitter taste of the caffeine pretty evident as an aftertaste. This one reminded me of cough medicine.

The labeling of the product suggests that I should experience up to two hours of energy with the Cola flavor and up to 4 hours with the Cherry. However, the difference in caffeine content between the two is only 50 mg. This likely has to do with what they consider the effect threshold to be as the caffeine is metabolized.

I experienced a pretty quick and nice alertness boost from both varieties without any jitteriness or side effects.  With both, the effects lasted a couple hours and the Max strength was a little longer, I'm not sure if it was double, but it did seem longer than other products with similar amounts of caffeine.

FireStar uses "extended energy release technology" but I couldn't find any documentation regarding which technology is used. Caffeine encapsulation and caffeine cocrystal are the common technologies used to extend caffeine's release. They are probably using encapsulation since the bitter caffeine taste is undetectable in the Cola flavor.

Overall FireStar Intelligent Energy is a convenient way to get a boost of caffeine without the expense or time required to consume an energy drink. I would recommend the Cola flavor but would advise you to only buy the Cherry flavor if you love the taste of cough syrup.

FireStar recommends no more than 8 Regular sachets or 4 Max sachets per day, but this is well beyond what is considered a daily safe dose of caffeine.

FireStar isn't candy and isn't suitable for children or those sensitive to caffeine.