These energy shots are made by BDI Marketing and are labeled as energy supplements appealing to those into fitness activities. They come in 4 flavors; berry, mocha, lemon-lime, and orange. 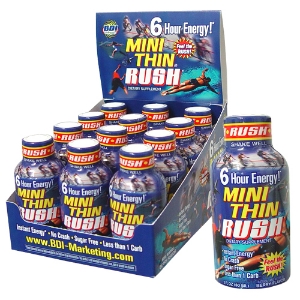 Many energy drink companies experiment with different approaches to the market of people looking for the juice to give them a boost. Some look to use the energy to help them at work or at school, however, many use it to augment their fitness. Preferring a vitamin supplement with a little kick to push them the extra mile or get those extra muscle-tearing reps at the gym, fitness enthusiasts often seek supplements for their edge. BDI Marketing provides a line of energy products badged "Mini Thin Rush" marketed just for these types of people, as well as anyone looking for a rush. I'm armed with 4 different types of potent Mini Thin Rush energy shots and ready to be put to the test. Can Mini Thin Rush give us that edge we all want, or does it fall flat?

The regular berry shot is a horrible imbalance of poorly emulated fruit punch "taste" with a disgustingly bitter aftertaste. I actually thought I was downing cough syrup for a moment. After a glass of water, I began to lose faith somewhat as this is supposed to be their standard flavor!

One of our shots adorned the "mocha" badge. I was a little reluctant to try this one since it's not often you find an energy shot with a coffee flavor, let alone one that actually emulates it well. My instincts were right. This shot tasted horribly watery and bitter with a vague mocha flavor garbled amongst it. I ended up downing half with haste then throwing the rest out.

After enduring the horrors of "berry" and "mocha", I had orange and lemon-lime left to judge - unwillingly. I consumed them both with fear, but I'm happy to say that they are far more tolerable than the two previous shots. Neither came close to being an accurate representation of citrus fruit, however. A brief, bitter rush of liquid with a tinge of citrus.

A quick glimpse of the packaging shows us that these shots are potent! Featuring 200mg caffeine, 200mg taurine, niacin, B6 and B12, it was easy to see that I was gonna feel these shots. They also feature something called eleuthero extract - an adaptogenic shrub with similar effects to panax ginseng.

All the shots feature the same amount of caffeine and vitamins, therefore each gave the same effects. Mini Thin Rush is right - these are ruthlessly powerful, especially on an empty stomach! I downed one of them before a trip to the gym and as studies have proven with caffeine, it helps increase physical endurance by a respectable amount. It was almost too much of a rush, even with my caffeine tolerance. As the bottle states, downing half and saving the rest for later is a good idea if you aren't used to caffeine (that is, if you can get past the taste!). Like Jolt's Endurance Shot, these are not casual drinks!

All in all, Mini Thin Rush shots are mediocre at best. Don't even think of picking up a "mocha" or "berry" shot as you will regret it. The citrus flavors are satisfactory and offer a viable alternative to other commonly grape-flavored shots on the market. Be warned though, with any of these shots, you will be bouncing off the walls.

200mg caffeine, 200mg taurine, niacin, B6 and B12, it was easy to see that I was gonna feel these shots. They also feature something called eleuthero extract - an adaptogenic shrub with similar effects to panax ginseng.