Perky Jerky was once a caffeinated beef jerky that obtained its caffeine from guarana.

This product has now been reformulated to be caffeine-free.

Originally Perky Jerky contained 150 mg of caffeine per 2 ounce package, but then lowered this amount to 35 mg/ounce and then again to just 10 mg/ounce. The newest products are all caffeine-free.

Perky Jerky contains no nitrates, no MSG, and no preservatives.

Where To Buy Perky Jerky 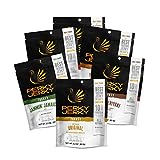 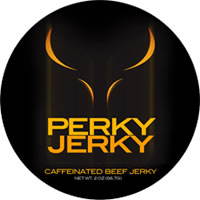 This review is of the original Perky Jerky which contained caffeine.

You’ve got to give immediate love and respect to a product with a name like Perky Jerky.

That’s one of the most enjoyable rhymes I’ve heard since “funky monkey” from the Beastie Boys song, “Brass Monkey.” More thought was certainly put into the name of Perky Jerky than their competitor: Alien Energy Jerky.

Naming is a fraction of the battle, though. Who’s the better choice when you have carnivorous hankering for a jolt of energy?

Just thinking back on my experience for what I’m about to write here urged me to pump my hands in the air and sing, “Awesommme!” in the lamest opera voice possible. Never. Never, have I ever tasted packaged beef jerky so damn good as Perky Jerky. Profanity warranted.

Teriyaki seems to be the main flavoring and the consistency of the meat just screams freshness. If you love beef jerky you need to pause here and go order some now. Go! Perky Jerky does not currently exist in alternate flavors.

Perky Jerky makes it no secret that guarana’s the big idea. Prominently written on the front of the beautifully marked package is, “flavored with guarana.” Wait, what? Since when has guarana been used as a flavoring? Maybe that’s what gave the teriyaki taste. Because, I mean, otherwise they would have said “flavored with teriyaki” and/or “energized with guarana,” right? But of course, and they didn’t. So I’m going to assume that guarana is just used for flavoring, not energy.

Ok, I’m giving this product a hard time. Guarana is the singular ingredient meant to give Perky Jerky its perk. Just how much guarana, you ask? Raise your hand first. Thank you. . Perky Jerky is now Caffeine-Free.

Perky Jerky has 40mg more caffeine than Alien Energy Jerky, which was a big letdown product for me in the energy department. Do those extra 40mg of caffeine do the trick? Nope. Jeeze it hurts me to type that word. I enjoyed this product so immensely that I wanted nothing more than the energy to be there, too. It’s just not. Hold me.

I’m going to bring this full circle. Who’s the better choice for energized beef jerky: Perky Jerky or Alien Energy Jerky? Neither of them gave me a push of energy, so it’s going to come down to taste. Alien Energy Jerky offers 4 flavors, and not one of them can stand up to Perky Jerky. Variety, however, is a big plus in my book. So I guess I’ll have to take a big step back and look at the holistic experience of the two choices. Um, Perky Jerky it is.