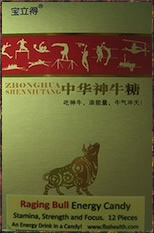 King of Caffeine sent over a box of Raging Bull for review. The cigarette pack-esque box is covered in Chinese, but has the ingredients and slogan translated into English.

I’ll forgo the De Niro jokes and take a look at the candy. Raging Bull is like a energy Lifesaver, and comes individually wrapped inside the box.

The taste was difficult to figure out at first. After sampling my second piece, it seems that there is a mix of root beer and chocolate. The taste is not bad, except that there is a strong caffeine bitterness when you either bite into it or let it dissolve slowly.

The box suggests that you take 1-2 a day as needed. After one, I felt no effect whatsoever, so I had another. I would rate the kick as minor, ironically like a Red Bull. You will need to eat several Raging Bulls to get a pick up.

Overall, I like the idea of Raging Bull, but I think the ingredient profile needs work. Perhaps more B vitamins would help with the effect. Either way, the taste isn’t bad, and the novelty value is high as well. I would not purchase a box of these for a time when I need a serious pick up, but Raging Bull Energy Candy is fun to have around as a back up.