Coffee Aroma and Smell Can Wake You Up

Do you start waking up at just the smell of coffee?

You aren’t alone and there’s even research to prove it.

I would argue that one of the best smells in the whole wide world is fresh ground coffee.

I mean fresh here. Not two-month old supermarket beans. Not Freeze-dried instant. But coffee beans that have been ground up a few hours earlier.

The smell of coffee (or rather lack of it) is one a number of reasons for Starbucks faced decline a few years ago.

According to the CEO:

He noticed how the smell of the company’s breakfast sandwiches overpowered the aroma of coffee and new flavors had replaced genuine inspiration.

As for that smell – new research has shown that just the SMELL of coffee is enough to wake up a bunch of sleep-deprived rats.

We don’t know if the same genes are suppressed in sleep-deprived humans, nor whether we would feel tired if they were, but many of these genes do have human equivalents. So the team says gene suppression may help explain why people feel bad when they haven’t had enough sleep – and that gene reactivation could explain why people love the smell of coffee.

Next the team hopes to identify the molecules in coffee aroma that affect gene expression. They suggest pumping them into factories to help revive tired workers who can’t sip coffee while operating machinery.

Coffee Has a Very Complex Scent 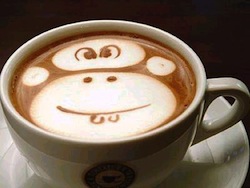 Researchers have so far identified 800 compounds in coffee and many of these are powerfully tied to scent.

Coffee is rich in heterocyclic compounds, which influence the flavor and smell of a substance.

Humans tend to love these smells since they hit many scent receptors. This helps people form powerful connections to items with these scents including coffee.

Smells can trigger good feelings, memories, and even trauma, so it is no wonder that the smell of coffee triggers feelings of wakefulness.

Coffee drinkers smell the coffee and this signals the brain that caffeine is indeed on the way, which provides stimulation.

In fact, I believe that the smell of coffee is actually much better than its taste. I drink mine black or with a little almond milk and bitterness is not one of the most appealing flavors to humans.

In any event, the smell of coffee and the drinking of it is something few would ever give up as the smell and taste are deeply tied to our brain’s pleasure center.

This one of the reasons responsible for our addiction to caffeine.

Do you think the best part of coffee is it aroma?