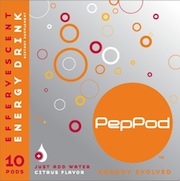 PepPod is like an Airborne tablet for the caffeine junkie. You simply add the tablet to water, tailoring the amount of water to the strength of the flavor desired.

The pod is small enough to fit into a bottle of water, which is quite useful. The innovation is interesting, but the big issue is whether PepPod works or not.

I chose to pick the “strongest” flavor by adding it to 8 ounces of water, the lowest choice in the directions. The taste was supposed to be citrus, and PepPod tasted like watered down orange juice to me. I have had Airborne, and the taste is not too far from it. On the plus side, there was no bitter caffeine taste.

PepPod contains 81 mg of caffeine, a big Vitamin B and C blend, Taurine, Glucuronolactone, Niacine, Guarana, Inositiol, Coenzyme Q10, Ginkgo Biloba, and Panax Ginseng. Aside from the low Caffeine, the blend is quite good. All of this comes with only 1 calorie and 1 carbohydrate, good for anyone watching their weight.

When I read the ingredients, I was unsure if I would feel a kick at all. I was dead wrong. I felt a nice lift in mood and energy only a few minutes after drinking PedPod. The effect lasted for a few hours, with no crash. It was as if I was firing on all cylinders, and then returned to normal gradually.

I was pleasantly surprised with PepPod Effervescent Energy Drink. It gave me an unexpected lift with no crash. The taste left a little to be desired, but I can forgive that in lieu of the great burst of energy. I like the fact that it only has 1 calorie as well. I would definitely try PepPod again.