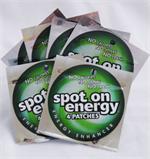 I was convinced that if there were anything that you could squeeze a milligram of caffeine into, it had been done.

Soda, candy, pain relievers, soap, water, etc… I guess my imagination was not quite broad enough to envision this weeks product, Spot On Energy Patches.

Trans-dermal caffeine delivery, as far as I’m aware, is a novel concept in the energy market. They come packaged in thin, foiled envelopes that open to reveal 4 vinyl patches on wax paper. Not unlike nicotine patches, you place one (or two) of these on a fairly hairless area of skin and go about your day without the signature of massive energy addiction, a 16oz can stuck to your hand.

I shook off Rockstar withdrawal long enough to make this report…

Obviously if I had tasted these, I’d have been doing it wrong. The energy without taste thing kind of intrigued me. Many times I’ll be partaking of an energy beverage thinking “If this didn’t have copious amounts of high powered stimulants in it, would I be drinking it?” The answer most times is no. Who would choke down a Monster simply because it tastes good. Maybe a few people but not the vast majority.

Spot On is a good alternative to those whose taste-buds cannot be subdued long enough for an energy fix. Another good aspect of this model is energy without calories as sugary energy drinks can be very high calorie (240 in an 16oz Rockstar Punched).

Each patch contains Taurine, Glucuronolactone, Green Tea Extract, Niacin, and Vitamins B3, B5, B6, and B12 in addition to a seemingly .

Spot On Energy now contains 65mg of caffeine per patch.

So what does get you? Turns out quite a bit. As recommended by the manufacturer, I wore two at a time and was ecstatic at the results. Shortly after putting them on, a wave of tingly energy comes on and then settles back into a perfect wide awake and alert state that lasts for hours. Best of all when the patches are depleted there is absolutely no crash.

You are only marginally aware that you are less amped than before. After several days with the Spot On patches I am hooked. There are so many situations were you can’t take an energy drink, but need to be alert and focused. The patch is perfect for taking tests, sitting in long meetings, marathon gaming sessions, you name it.

I was skeptical that such a small amount of caffeine would be able to lift me in any significant way. I’m happy to say that my skepticism was completely unfounded. Others that I’ve had try the patches report much the same result.

Strong, clean energy. No jitters, headaches, heartburn, or upset stomachs. Also, considering they are $2.99 for a 4 patch package, they are quite a good value. If I were rating on a scale of 10, Spot On ranks a solid 9. Try some if you can find some. You’ll be surprised too.

Spot On is available on Amazon here.