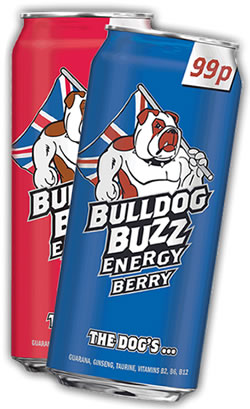 Bulldog Buzz Energy Drink is a popular discount energy drink in the UK.

If you ever plan to travel to England, we lack the treasure trove of energy drinks that this website has to offer.

However, Bulldog cropped up in the past year or so that has appeared once on this website, but only as part of a homage to dog based energy drinks. Bulldog Buzz really is about the best thing Britain has going for it in the energy department.

Bulldog buzz is a rather oddly sized can being no standard size for an energy drink or in fact any other British drink. (Although to be fair its initial idea came from a Canadian company)

What does it for me though is the can; nothing says Britain like a pissed off bulldog and the Union Jack, but this pride of the British Nation is becoming rarer and rarer to find with most of the shops near me canceling their orders making it as faint a memory as the Pussy Energy Drink that appeared once on a shelf in the local garage and then never again.

It's not all good news; the drink came in two flavors kindly represented by the color of their cans; Blue and Red (Berry & Citrus). One tasted awful (but it didn't stop me from drinking it) and well the other still had a little to be desired. To tell you the truth, even if they both tasted bad I'd buy it just for the fact that any drink that tells me it's the dogs bollocks on the can has to be good.

Bull Dog Buzz is boasting 55mg of caffeine per 100ml (204mg/can) instead of the average 32mg. This means it has that extra noticeable kick coupled with 5000% daily allowance of B vitamins.

As for what you can expect to get out of a can of Bulldog Buzz it seems to vary between the flavors. From a personal point of view the Berry seems to provide a better kick and whilst it might not be the strongest drink on the market it seems to have enough of a punch to wake the caffeine hardened junkie up in the morning.

For its price (retailing at around $1.50) in the UK it’s a bargain, however this seems to be necessary with it’s biggest contender being Relentless owned by Coca-Cola®. Bull Dog Buzz it’s self is still not widely available in the UK and due to its country specific advertising is unlikely to be seen in any other country.

How Does Bulldog Buzz Compare?