The makers point to a study that apparently concludes that Celsius will raise metabolism and cause calories to be burned. They claim that each drink will help you burn up to 100 extra calories.

The drink comes in a number flavors including:

Update: Celsius now also comes in powder packets that can be mixed into water or the drink of your choice. Each pack contains 200mg of caffeine just like the RTD version.

Celsius is now available in a new pre-workout version called Celsius Heat with 300 mg of caffeine.

Where To Buy Celsius Energy Drink 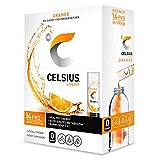 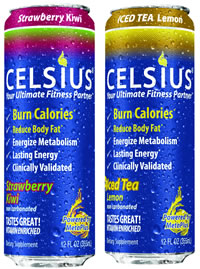 Today I have for you two reviews in one. Celsius was kind of enough to send me two new flavors to try out, Iced Tea Lemon and Strawberry Kiwi.

The intriguing catch with Celsius energy drink is that it is said to be able to burn 100 calories when consumed 30 minutes before exercise. Of course I had to try this beverage for it's recommended use, and since I had a second flavor to explore I wanted to try a second form of energy test, that being a morning wake-up scenario.

Now I shall retell the tales of the Celsius energy drink trials.

Celsius Iced Tea Lemon:
Upon the first sip I was somewhat taken aback by the strong, sour, bitter lemon. Quite a bite. This is followed by a sweeter iced tea flavor and finishes with a medicinal "diet" aftertaste. There is an earthy quality to the flavor. I am not a big fan of this Celsius flavor, so I chug it to get it down. Luckily it is not carbonated so it goes down easily.

Celsius Strawberry Kiwi:
Very fruity and light, slightly pale aftertaste with a sour finish. Reminds me heavily of watered down fruit juice. The taste is exactly what the name suggests, strawberry and kiwi. Possibly a slight hint of berry. All in all, this Celsius flavor is by far my favorite of the two.

Celsius Iced Tea Lemon:
To my surprise and praise, this 12oz. can contains 200mg of caffeine. The usual energy supplement contenders are there as well, 2mg of Vitamin B6, 6mcg of Vitamin B12, 20mg of Niacin, and Taurine, Guarana, green tea leaf extract, ginger extract, and Glucuronolactone in a 1810mg Proprietary Blend.

Celsius Strawberry Kiwi:
This can also shared the 200mg total of caffeine, as well as every other ingredient as the former.

Celsius Iced Tea Lemon:
I drank this thirty minutes prior to one of my nightly rituals, a long midnight walk around my town. Boy howdy, I was not in the least bit disappointed. While walking around I actually did a little dancing to the music I was listening to since I had so much energy. Celsius was a truly power-packed boost. Also I would like to note this was not in the midst of a caffeine tolerance break. So to be honest I was stunned at the wonderful energy I had to burn up. After I got home about an hour and half later from dancing around my town and out-running a skunk, I could barely get to sleep. Luckily this is where the next beverage comes into play.

Celsius Strawberry Kiwi:
Finally I was able to force myself to sleep at around 7 AM, knowing I had to go somewhere at 12:30 that day. I awoke fuzzy and groggy, as usual, and immediately reached for Celsius Strawberry Kiwi. Within 20 minutes I was bright eyed and bushy tailed and ready to take the day head-on.

I am extremely impressed with amount of energy I was given from drinking these two new flavors of Celsius, but the taste of each was barely passable. Although, I will still grab one of these if I need a fast and powerful boost. Since they are non-carbonated they are extremely easy to get down, far surpassing the bitterness of the dreaded energy shot gulp and quite possibly the energy obtained from energy shots as well.

In the end, the kick wins over the taste for me. Because if you are drinking an energy drink for flavor, aren't you essentially just drinking glorified soda?

How Does Celsius Energy Drink Compare?