NOS Energy Drink is named after a brand of Nitrous Oxide and is popular with car and racing enthusiasts.

We just received a tip that NOS has lowered the caffeine content of their energy drinks from 260 mg to 160 mg per 16 Fl.oz. can.

It looks like some retailers are now selling the new 160mg version, but others are still selling the 260 mg can especially Charged Citrus and Loaded Cherry.

The original NOS Energy Drink is grapefruit/citrus flavored and comes also in a 22 Fl.oz resealable bottle. This version has 220 mg of caffeine.

Other flavors of NOS include:

NOS is manufactured by the High Performance Beverage Company. This is owned by Fuze Beverages LLC, which has now been purchased by Coca-cola.

However, recently Coke gave Monster Energy the rights to this brand as part of a stock deal between the two corporations.

Note: Consumer Reports r tested NOS and they found it to only contain 224mg of caffeine per can instead of the 260mg NOS used to have. (old version)

Perhaps the recent increased FDA scrutiny concerning the caffeine in energy drinks is why NOS adjusted their caffeine amounts to more moderate levels.

Where To Buy NOS Energy Drink 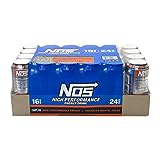 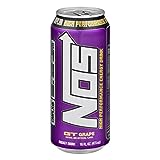 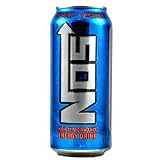 How Does NOS Energy Drink Compare?

From the NOS site at http://www.drinknos.com/ and from Fuze Beverages as well as the cans.