Not only does Starbucks have an in-store made Refresher Green Coffee based beverage, but they also have canned versions.

The canned version of Starbucks Refreshers is a bit different than their store variety because it is carbonated as well as includes a dose of ginseng and B vitamins.

I Tried the Orange Mango Refresher

This drink has a light carbonated citrus flavor and was easy to drink.

They blended the flavors nicely and there was only a slight aftertaste from the Stevia used to compliment the 25% real fruit juice.

Starbucks refresher did pep me up a bit from the caffeine in the green coffee extract. Starbucks customer service stated that each can contains 40-55 milligrams of caffeine.

Pepsico lists the caffeine content as 50mg. Their in store refresher has 45mg of caffeine per 12oz, but because of the ice used, I would expect the canned variety to have a bit more.

Starbucks Refreshers also come in a Via packet. According to Starbucks each Via Refreshers packet contains 40-55mg of caffeine.

Refreshers will probably be a hit for Starbucks fans who aren't a huge fan of their roasted coffee flavored beverages.

See Here for Our Complete Guide to Starbucks Caffeine.

Where To Buy Starbucks Refreshers Canned 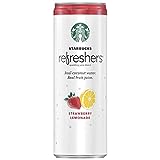 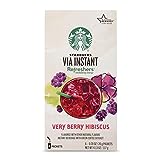 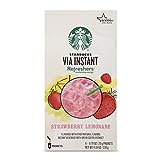 How Does Starbucks Refreshers Canned Compare?

The can and Starbucks Customer Service http://www.pepsicobeveragefacts.com/