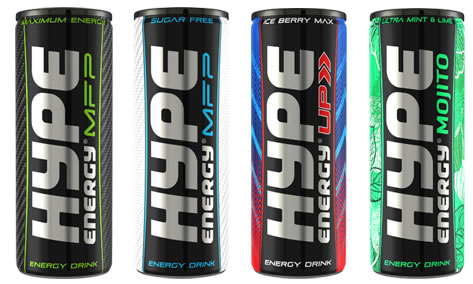 It is rather ironic that Hype Energy chose to name their product after a problem that the energy drink industry suffers from.

How many times have you tried an energy drink that was not as good as advertised?

When I received the line of Hype drinks, I was expecting another Red Bull clone. I was rather surprised at the variety this line has. Hype comes in four varieties: Regular, MFP, Enlite, and Organic.

To be blunt, I did not feel much from the Hype Energy Drinks. I tried them at several different times to give them a chance, but the drinks did not deliver in the energy department. Whether it was before a workout or after a long night with little sleep, I didn’t receive the pickup I usually get from an energy drink. To be fair I only received the 8 oz versions of Hype, so perhaps the 16 ounce could deliver a kick, but that’s only speculation.

Overall, I think Hype needs some improvement. The flavors are there, and different from the energy drinks currently on the market. If more energy was packed into each can, Hype could be a serious contender. Until then, I would look elsewhere. Now, can anyone tell me what MFP stands for?

We recently were sent Hype Energy UP to sample. Th version is similar to original Hype, but has a cool mint aftertaste. The taste of the drink is a bit strange since most people including myself aren’t accustomed to mint in their beverages. The taste was ok, but I wouldn’t choose it if given the chance.

Hype UP is pretty similar in energy to that of Red Bull. A few additional vitamins and ingredients like ginseng, but all in all the same effect.