AMP Energy Drink has gone through a lot of changes over the years to better compete in the energy drink market.

However, despite all the changes PepsiCo has made, this drink still struggles a bit, but was ranked as the 5th top selling energy drink in 2013.

In its most recent attempt to reinvent itself, AMP simplified their product line to the following:

Here are some reviews of AMP’s earlier attempts at a winning energy drink. 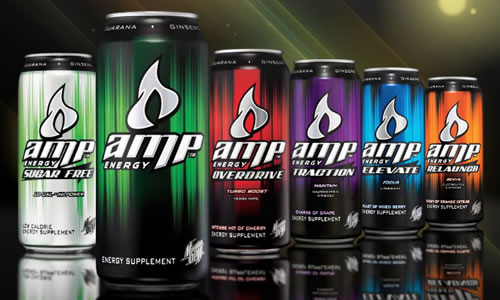 Amp; it’s a term used often by eccentrics and extremists to describe their excited mood, and for good reason too. The phrase was coined as a common abbreviation for amphetamines, which well, get you amped, go figure huh. Regardless, a few years back Mountain Dew took a step in the right direction to appeal to their more die-hard consumers with a new product line with a similar name.

Well energy-fiends, it’s been 7 years since that venture began and starting this past January, AMP received not only a new image, but a wide range of updated flavors. Let’s see what kind of competition this new AMP family brings to the neighborhood.

The new cans in the lineup are a welcome change to the all too common green silver and black style of so many other energy drinks nowadays. The new colors (and corresponding flavors) include purple (grape), blue (mixed berry), orange (pretty obvious), and my personal favorite red as cherry.

The whole lineup might not win the hearts of the major Fiends but I’d be willing to bet that anyone could find at least one flavor that they enjoyed. I have never been a strong proponent of regular AMP but even as picky as I am I was still was able to find that the cherry, also known as AMP Overdrive, was surprisingly good as far as artificial cherry goes.

Despite the abundance of flavors to choose from, the part of the review I was most interested in was how the new drinks would compare in effects to the regular flavor. Each flavor is marketed as having slightly different effects (some having L-Theanine for relaxation or D-Ribose for sustained energy).

Unfortunately there was only one flavor that stuck out in today’s “heavy hitting” drinks and it just so happened to also be the best tasting. If you’re paying attention you would already know that this was again the AMP Overdrive and I’m starting to welcome the abundance of new drinks on the market.

In light of the fact that I felt very little effects from the regular AMP flavors, my description is only relevant for AMP Overdrive. Although not shockingly harder hitting than any mainstream drink such as Monster, it did have enough kick for me to notice, but I had to really look.

Being used to large amounts of caffeine might be a reason for this but in actuality the ingredients just don’t build it up to be that strong. 160 mg of caffeine per can is roughly equivalent to a Starbucks Double Shot. Now I don’t know about you, but Double Shots have stopped working on me as a viable means for energy and AMP is starting to seem more and more average.

If you can imagine the market consisting of Soda (Mountain Dew) and Energy Drinks (SPIKE) the entire AMP lineup falls disappointingly dead center. A few of the other (rather pointless) ingredients include, 34mg of Ginseng, 248mg of Guarana, and negligible amount of B vitamins. These ingredients aren’t pointless because of what they are able to do, but because the amounts just aren’t great enough to provide any sort of reaction. Pepsi Co. would’ve done better just naming this Mountain Dew 2.0 without adding the chemicals that reclassify it as a supplement rather than a beverage (by the FDA’s definition).

So it was a tough call, can a mediocre drink that gave me 1 enjoyable flavor out of 6 be considered any more than mediocre?

Can a glorified soda be touted as legitimate competition to the big energy dogs? I tried, but everything painted this drink, in any flavor, as averagely mediocre. Maybe people new to the energy market might get a kick out of this or people who have suckled on the Mountain Dew teat for years but AMP just didn’t get me amped, and that’s the hard truth. If you do happen to fall in one of those two categories, most of the flavors can be found in your local 7-11 for $2-3 dollars per can.

So, show of hands who wants a review of Amp Sugar Free?

Hmmm… alright. How about this: don’t raise your hand if you want the review. Commonnnn it’s got a new label and formula!

For some odd reason, my first few sips tasted salty. Maybe it was because of the tears I cried. I adore the taste of the original Amp, I really do. It was the first energy drink I ever fell in love with and still holds a nostalgic value for me. So when I first tried the sugar free version and realized the original Amp taste was obliterated, it broke my heart.

The sucralose flavoring is not just riding backseat to the standard Amp taste as it should be. It’s taken the wheel and the Amp taste is tied up in the trunk.

The usual mediocre 160mg of caffeine is lurking around in New Amp Sugar Free along with an eyebrow-raising 252mg of guarana. 200% of your daily value of niacin, riboflavin, and pantothenic acid are standing in as the B-vitamin complex (those words just so happened to be vitamins B2, B3, and B5. The more you know).

Not all hope is lost, because this new sugar free version will give you as much energy as a standard Amp. Okay, correction, so most of the hope actually is lost.

There’s two people that should be looking out for Amp sugar-free: diabetics who are a little short on sleep and the energy fiends who try everything without question. If you don’t fall into those two demographics, move along there’s nothing to see here.

I can remember a time when I had a different opinion of Amp energy drinks.

Back before they were sponsoring Nascars and making drinks called Elevate. Back then they were hardcore Mt. Dew and they were fantastic.

I don’t know how the brand fell off the mountain for me, but I never buy them anymore. It bums me out when I walk into a new convenience store and all they have are Amp and Monster.

Yet here I am with not one but three new flavors of this monstrosity. I started with the Lightening flavor, thinking no one, not even Pepsi can screw up lemonade. Can they?

The first gulp tasted to me like water. Very little flavor at all. As I got toward the center of the can the lemonade taste started to sort itself out. I was surprised at how weak the flavor was in this stuff. The other Amp drinks go out of their way to be bold and strong. It’s not that its bad tasting, it just doesn’t have very much taste at all.

My complaint with Amp all along is that it costs as much as other energy drinks and is very weak in comparison. This new Amp is by far the weakest of the bunch. No noticeable energy boost at all with this. Maybe my caffeine tolerance is too high for 160mg to affect me. I really think it’s the lack of B vitamins that dooms this stuff.

I wasn’t a fan of Amp before and this drink has worsened my opinion of their products substantially. This stuff is going to sell big and it’s sad it will be taking a slot in the cooler where something better could be. My advice would be not to buy it. Let it sit on the shelf and collect dust. In 8 months or so it’ll be in Big Lots for 50 cents a can and then it might be worth a try. Don’t reward the people making this garbage with your money or they’ll just keep doing it.

Now here is a part of the energy drink world that companies haven’t truly explored yet, the energy juice.

We’ve seen energy drinks with 50 or 60 percent juice, but AMP has upped the standard with their new 100% juice, AMP Energy Juice.

Juice implies it’s good for you, yet energy usually means the opposite, so can AMP, with both of their flavors (Orange and Mixed Berry), get the best of both worlds, and oh yeah, make it taste at least halfway decent?

Note: It looks like Amp Energy Juice has been discontinued.

I tried both the orange and mixed berry flavors of AMP Energy Juice and must say I’m not usually a fan of mixed berry drinks, so I wasn’t too keen on the taste of that, yet the orange was very impressive! Both were incredibly smooth and were very nice to drink. Orange tasted just like a pulp free orange juice with no real after-taste or bitterness.

Both juices had nearly identical nutritional facts. Not only loaded with vitamin C as you would expect from the “juice” part, this “juice” also packs 120mg caffeine along with 150% Niacin, 150% vitamin B6 AND B12, Taurine, Ginseng, and Guarana, making this not just your normal Sunday morning breakfast juice.

Effect was right on. A Nice boost and alertness to the beginning of my day, that lasted for about 5 hours, with no real crash towards the end. Not really an energy buzz, more like a lift that left me feeling good all day.

My verdict is a huge thumbs up on AMP Energy Juice. If you’re a mixed berry fan you will love the mixed berry, yet in my case I can definitely see myself reaching for the Amp Orange the next time I need that little kick in the morning when my average breakfast wont cut it. AMP has continually made solid products from the beginning and their new line of energy juices continues in that direction.

What do you think? Are the new AMP Energy Drinks better than the old versions reviewed here?