GURU is an energy drink originating in Canada but distributed all over the world.

It contains naturally-occurring caffeine due to the presence of guarana seed extract and green tea extract.

Their energy water contains just 100 mg of caffeine per 12 floz can.

Where To Buy GURU Energy Drink 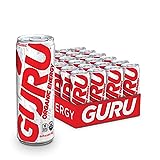 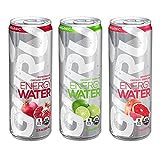 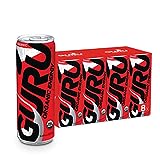 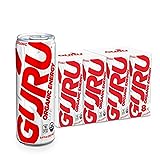 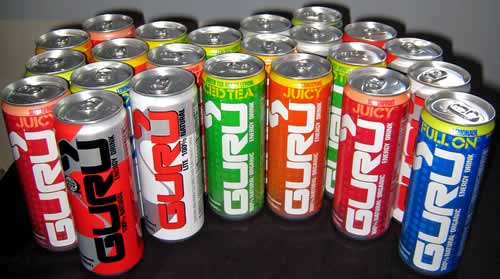 Ready and willing to put me through trials before learning how to live day in and out, like a Stock Market Guru or Financial Guru.

When I think of Guru Energy Drink however, I think of a serious can that has come to the party with hopes to impress. Seeing as Brain Toniq was the original 100% natural energy drink, Guru might not see as many open arms as it hoped for.

With six alternative flavors each coming in 12fl oz. cans, this Guru definitely has plenty of costumes. The flavors themselves, are much more difficult to explain.

Looking at the overall Guru package it becomes quite clear (rather eerily so) that there is a ramp-up throughout the entire line-up. One example being Calories. Lite contains 10 Calories, Guru 100, Green tea 110, Lemonade 120, Superfruit 120, and lastly Tangerine at 130. I'm not sure how or why they orchestrated such a creepy caloric makeup but there's surely something for each and every calorie counter out there.

All six cans have the exact same 1,285mg Proprietary Guru Blend, containing Guarana (97mg) for caffeine, Echinacea, Ginseng, and Ginkgo Biloba. Aside from the nearly useless Ginseng and Echinacea, the other two are necessities when it comes to every Organic Energy Drink. Normally I don't break down drinks into their actual ingredients but in this case there's something special I noticed. Lots and lots of organic natural juices, and rare ones at that.

Acai juice, black currant juice, yumberry juice, white grape juice, and cane juice are just few of the wide variety these drinks offer. Note also that the Lite is sweetened with Stevia Extract (an asian sweet leaf supposedly 300x sweeter than sucralose) for hardcore health fanatics that are interested. If you haven't been impressed up to this point, now is the time to start. Some of those fruits even I have never been able to find, and believe me, I've looked. Considering the fact that the Superfruit contains the majority of these fruit juices it instantly became my favorite.

How Does GURU Energy Drink Compare?