NRage strips are similar to breath freshener strips - that melt in the mouth.

Makers of NRage Energy Products state that "Four strips equal the caffeine in the average energy drink or a cup of coffee.

So consume responsibly and do not exceed 24 strips in a 24 hour period." As a typical energy drink (such as Red Bull) contains 80mg caffeine -

We estimate that a single strip of NRage contains 20mg of caffeine. 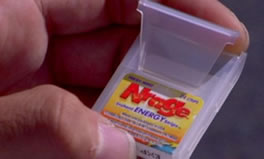 NRage Energy Strips have recently hit the market. Like a combination breath freshener energy drink, the strips melt in the mouth rather than being chewed and swallowed.

"What's so cool is that the ingredients are absorbed through the cheeks and gums which is the fastest way to the bloodstream rather than the gastrointestinal tract as with all other products."

The strips aren't without controversy. Co-founder of NRage claims that college students refer to the NRage as the “Strip Without The Drip” (src). We're not talking about a tap dripping here - but presumably an IV drip - another drug connotation (right on the back of the Cocaine Energy Drink hype).