These shots have become popular with body builders and fitness enthusiasts - a few gulps and all the caffeine you could ever want.

Power Rush is just 2.5 ounces but packs in 350mg of caffeine. For comparison, a shot of espresso (1.5 ounce) has around 77mg of caffeine. The bottle is supposed to contain 2 servings.

Use Redline Power Rush with caution and keep it out of the reach of children.

Redline have a number of warnings: Not for those under 18, and only 1/2 a bottle should be consumed within a period of 7 hours - which makes one wonder why they didn't just make the bottle 1.25 ounces in the first place.

The drink is sweetened with sucralose (Splenda). It also contains N-acetyl-L-Tyrosine and Beta-Alanine. It lacks some of the ingredients of its big brother Redline RTD (such as Evodiamine).

Where To Buy Redline Power Rush

Price: $88.56 Too low to display Available from Amazon / VPX 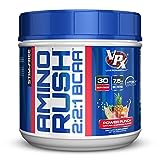 How Does Redline Power Rush Compare?