What Time Frame for the Death by Caffeine Calculator? 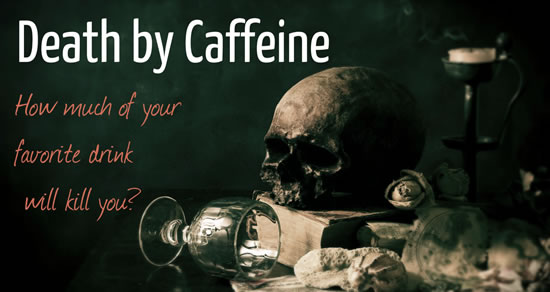 Ever since the invention of our Death By Caffeine calculator we are often asked one question in particular.

The one question, by orders of magnitude, that gets asked here more than any other is:

Let’s apply some common sense to this

If you died after a lifetime consumption of 200 cans of soda, most Americans wouldn’t make it past age 14. That’s clearly not the answer.

If you died after 200 cans of soda in a month, there would still be plenty out there who wouldn’t make it past age 30. It’s painfully easy to drink 6 cans daily, especially if you’re trying to stay awake to finish a project. Conversely, it’s about 142 cups of coffee for most coffee drinkers. That’s under 5 per day. Many people can drink more than that with few side effects. It’s not monthly.

Still not the time frame, but we’re getting warmer.

That’s actually believable. If you managed to ingest that much caffeine in one day, you won’t be feeling so hot. In fact you may be in serious trouble. Not everyone’s liver works at the same speed (caffeine sensitivity level), and some people have reported feeling the effects of caffeine for a full 12 hours – for most people this is more like 4-5 hours.

It’s how much caffeine you have in your system at one time.

Yes, it’s rare for people to die from caffeine in beverages.

However, don’t actually try it!.

After 1 gram, you would be very sick indeed.

Unfortunately, there are some products that contain concentrated caffeine and these make it much easier for a person to overdose.

What Formula is This Based On?

Our Death by Caffeine calculator uses the LD50 (the lethal dose amount of a substance that will kill at 50% of the population) for caffeine. This on average is 150 milligrams of caffeine per kilogram of body weight. For most adults this equates to around 10 grams of caffeine.